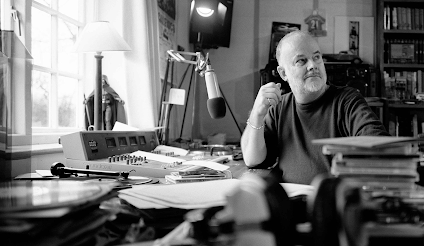 The Fall recorded more Peel sessions (24) than any other artist. The Complete Peel Sessions box set is an essential purchase for anyone with even a passing interest in The Fall. These two facts are indisputable.
The way that the sessions were recorded often captured a spontaneity and freshness that was to some extent diminished in the final studio version; there were also occasions where the session version was a rough, undeveloped idea upon which the group would later improve. This is where it all gets a bit more disputable…
‘I prefer the session version’ occasionally feels like shorthand for ‘I have a more in-depth knowledge of the back catalogue than you’. That doesn’t mean it isn’t often true, however…

The 'Session vs Official' League

I'm not entirely convinced that 'official' is the correct word to use, but it's hard to settle on the most appropriate terminology. What I mean by 'official' is the album equivalent - or, if it wasn’t released on an album, its first ‘regular’ studio-recorded version on a single, EP, compilation, etc. You all know what I mean.

Peel 15/6/78 vs Live At The Witch Trials
The competition opens with a close one. The Peel version just gets the nod for two reasons: the bass has a thicker, deeper sound, and Burns’ busy drumming doesn’t really require the darting about between channels that it gets on LATWT.
PEEL 1 - 0 OFFICIAL

Peel 15/6/78 vs Live At The Witch Trials
Hard to separate again, but there's a clinical angularity about the album take that just about wins out.
PEEL 1 - 1 OFFICIAL

Peel 15/6/78 vs Live At The Witch Trials
The reverb on the Peel version vocals is a bit unnecessary, as are Steve Davies' congas; the LATWT take is sharper and more satisfying.
PEEL 1 - 2 OFFICIAL

Peel 15/6/78 vs Live At The Witch Trials
Like 'Mother', the album take is more together and focused, but the raggedness of the Peel version probably suits this song better.
PEEL 2 - 2 OFFICIAL

Peel 6/12/78 vs Dragnet
Whereas the four songs on the first Peel session did not vary hugely from their album counterparts, there's a vast difference between the two takes of 'Put Away'. The session version has the same overall feel as the LATWT material. On Dragnet, however, the absence of Pawlett's keyboards (replaced by bluesy slide guitar and kazoo) and Mike Leigh's adoption of a swing beat give it a looser, murkier sound. The album version feels like progress, so it gets the vote.
PEEL 2 - 3 OFFICIAL

Peel 6/12/78
An excellent track, its punk-prog blend, like 'Various Times' marked the group out as much more inventive and experimental than many of their peers. Although there are a few live versions, it never received another studio recording, so there's no impact on the score.

No Xmas For John Quays

Peel 6/12/78 vs Live At The Witch Trials
Like 'Industrial Estate', there's a touch of wild abandon about the Peel version that just about gets the nod.
PEEL 3 - 3 OFFICIAL

Peel 6/12/78 vs Live At The Witch Trials
Although the way that Burns' drums veer between channels on LATWT is a bit of a distraction, the Peel version is a little hesitant in places and feels less convincing in comparison.
PEEL 3 - 4 OFFICIAL

Peel 24/9/80 vs Grotesque
Both excellent, but the Peel version just about wins the tie for the way it captures the exuberance of Paul Hanley's extravagant fills.
PEEL 4 - 4 OFFICIAL

Jawbone And The Air-Rifle

Peel 24/9/80 vs Hex Enduction Hour
The Peel version is undoubtedly impressive, especially given Steve Hanley's revelation that the group had ‘never played [it] all the way through without messing it up’ before. It still falls short of the astonishing intensity of the Hex version.
PEEL 4 - 5 OFFICIAL

Peel 24/9/80
Simply one of the most astounding moments in the group's history. Never 'properly' recorded otherwise (the weird, lo-fi demo recording that appeared on Totale's Turns certainly doesn't feel like an 'official' release, although I guess technically it is); possibly fitting, as it's hard to see how it could have been improved.

Peel 24/9/80 vs Grotesque
Really hard to separate; the Peel version just about emerges victorious because of its demented energy.
PEEL 5 - 5 OFFICIAL

Peel 31/3/81 vs Slates
The taut, controlled atmosphere of the Slates version works a little better than its Peel equivalent; in addition, there's a bit more invention around the guitar work.
PEEL 5 - 6 OFFICIAL

Lie Dream Of A Casino Soul

Peel 31/3/81 vs Lie Dream Of A Casino Soul single
The Peel version is brash and energetic but a little incoherent in places; the single version is a clear winner.
PEEL 5 - 7 OFFICIAL

Peel 31/3/81 vs Hex Enduction Hour
Recorded only a week after its live debut, the Peel version is an intriguing glimpse into the song's origins, but feels a little haphazard and overstretched. Falls short of the imperious Hex version.
PEEL 5 - 8 OFFICIAL

Peel 31/3/81 vs Grotesque
Hard to compare the two. On Grotesque, the song is relentlessly bleak and repetitive (although not without humour -  ‘see ya mate; yeah, see ya mate’); the Peel version's diversion into a Coast To Coast cover is fun and energetic. I'm calling it a draw.
PEEL 5.5 - 8.5 OFFICIAL

Peel 15/9/81 vs Hex Enduction Hour
Another tough call. Both are unrelentingly powerful, and the album version benefits from the remarkable 'Fortress' - 'Deer Park' transition. The Peel version, however, has a raw energy that just about wins the day. (My favourite version was performed in New Zealand in 1982.)
PEEL 6.5 - 8.5 OFFICIAL

Peel 15/9/81 vs Look, Know single
Clearly not an MES favourite, as he requested that both versions be omitted from the 2005 reissue of Hex. The nice contrast between Riley's prominent backing vocals (possibly one of the things that turned MES against the song) and Smith's drawl on the single version give it the edge.
PEEL 6.5 - 9.5 OFFICIAL

Peel 15/9/81 vs Hex Enduction Hour
The Peel version (another track that MES vetoed from the Hex reissue), although excellent, is a little hesitant in comparison to the one on Hex. This was at least partly due to the fact that the song had been honed with Karl Burns on drums during the group's US tour in the summer of 1981. ‘It was clear that the band had evolved while I wasn’t there’ Paul Hanley explained, ‘and Mark was a bit frustrated with my version of Winter in particular. I played it how I remembered it, which was quite loose and behind the beat. With Karl it’d become harder and more nailed on.’
For the split-in-two Hex version, Smith took the unusual step of asking Burns and Steve Hanley to re-record their parts. As there was no click-track, the two of them just had to do their best to keep up. Consequently, just after the halfway point of ‘Winter 2’ the rhythm section, as Paul Hanley describes, ‘slips its moorings and lurches drunkenly away from the rest of the band until it’s impossible to work out who’s playing along with who… everyone except Mark thought it was a terrible idea, but the timeslip brilliantly mirrors his lyric’s blatant disregard for the conventions of linear time.’ A clear victory for Hex.
PEEL 6.5 - 10.5 OFFICIAL

Who Makes The Nazis?

Peel 15/9/81 vs Hex Enduction Hour
The song was virtually made up on the spot for the Peel session, and it shows. However, by the time it came to record Hex, the song hadn't really been developed to any great extent. The sprightly tempo, incongruous toy guitar and Steve Hanley's embarrassed backing vocals make the Peel version the winner for me.
PEEL 7.5 - 10.5 OFFICIAL

Peel 23/3/83 vs Perverted By Language
The Peel version bristles with aggression and Scanlon attacks the song with zest, but both Smith and Steve Hanley are rather buried in the mix. The gloriously taut and aggressive album version takes the point here. (My favourite version is the one they played on The Tube.)
PEEL 7.5 - 11.5 OFFICIAL

Peel 23/3/83 vs Perverted By Language
Session #6 was the longest of all the Peel sessions, clocking in at an extravagant 31:29, and 'Garden' sprawls over ten thrilling minutes. The PBL version (a mere 8:45) verges on perfection, but the Peel take is simply exhilarating; it has a menacing, intense momentum that marks one of the high points of the group's entire career.
PEEL 8.5 - 11.5 OFFICIAL

Peel 23/3/83 vs Perverted By Language
The album take is a little more subtle and controlled, but the Peel version - almost as expansive as 'Garden' - gets the vote, just.
PEEL 9.5 - 11.5 OFFICIAL

Peel 23/3/83 vs Perverted By Language
Peel session #6 was the first to feature the two-drummer line-up, and the growing understanding between Karl Burns and Paul Hanley makes a significant contribution to making it one of the group's most satisfying visits to Maida Vale. This is particularly apparent on 'Fitter', in which the pair concoct a brutally clattering assault. In addition, Scanlon's guitar work exhibits a slashing abandon that isn't captured quite as well on PBL. The downside of the Peel version is that the backing vocals (a key component of the song) sound like they were recorded in the studio next door. Even so, it's another point to Peel.
PEEL 10.5 - 11.5 OFFICIAL
A quarter of the way through, and there's only one point in it...

Popular posts from this blog 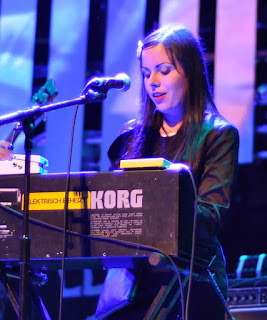 When MES died, many of his obituaries made extensive reference to Brix and her influence on the group. Which was entirely reasonable, as I talked about in the previous post. However, very few made more than a passing reference to Eleni Poulou (her first name seems to get a range of spellings, but Eleni is what was on most Fall sleeve credits and it's also what she uses on her Instagram), who was not only Smith's third wife but the third-longest serving member of the group other than MES himself, her fourteen years' service only being topped by Steve Hanley (19) and Craig Scanlon (16).
Eleni's vocals and her effective if not always virtuosic keyboard work were a key component of late period Fall, so here are ten of her most notable moments.
Spotify playlist
YouTube Playlist
[N.B. There are differences between the two - see below.] I've Been Duped Sounds like Nico covering The Rezillos. Live versions tend to outstrip the IWS take, this being a prime example: